Cool and clever stuff only works if also clear and easy. So what about Blippar?

It doesn't seem that long ago that QR codes were all the rage. In fact it was less than 3 months ago I write about QR codes being cool, but pointless unless used properly.

That still rings true, and I suspect the same for newer kids on the block, including Blippar. For those not aware of this new technology, read this insightful piece entitled Can Blippar make QR codes redundant?

Blippar which is just about to launch, is an augmented reality mobile app which sets about making it easier for mobile users to interact with offline advertising. It uses image recognition to launch interactive content on the user's phone, which is easily triggered by a logo or image on an ad.

I go back to the point of my earlier post. Very cool, if used properly.

People talk about low take up rates of QR code apps and the like. That doesn't bother me so much. Enough people have used them/are using them to make use of them.

But from a charitable perspective, while this stuff excites me, I'm skeptical. Not because I can't see ways to use them, but the take-up on this kind of stuff (I.e. QR codes) has been minimal, if even noticeable. So what's to say we'll release the risk shackles and dive head first into something like Blippar?

I hope we do, the possibilities are endless. Imagine you're an environmental org and want to highlight to print readers the destruction of forests. An image of some trees doesn't really cut it, but a quick snap of the ad and a 30 second "walk" through said forest just might do. The clip finishes with you posting a video message or attaching your name to a petition that's being blasted directly to the Environment Minister.

This would work because it's powerful, good content that uses a 'less' engaging media to bring home an important message. Backed up with a direct action request.

It wouldn't work if it was simply clever and cool.

And that's the point with any new piece of technology out there. Don't be dazzled simply by the bright lights. Think about real, easy ways to bring your content to life, aimed at the right people, armed with an end goal in mind and delivered to enhance other media simultaneously.

I've started my own agency..

After 12 years of working for some of the best agencies around the world, I decided it was time to set up my own.

And so flat earth direct was born.

flat earth direct is dedicated to fundraising and social action for good causes. Quite simply it’s about direct response, digital and campaigning stuff that results in real, tangible outcomes.

There are two distinct things I'm trying to do by setting this up.

1 Deliver the best results by bringing in the best people, regardless of location.
2 Work with organizations that really want to grow, particularly those who are usually handcuffed by smaller budgets.

We're going to be really focused on digital fundraising and marketing, all things direct response and advocacy stuff that supports the pointier end of campaigns.

Our website is a couple of weeks from being finished, but in the meantime if you want to find out a little more, here's how you can get in touch with me. 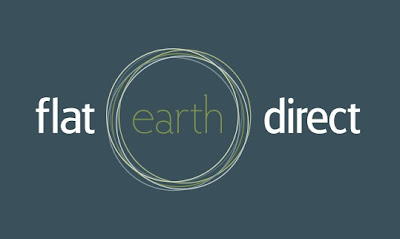 Posted by Jonathon Grapsas at 9:31 AM 11 comments:

Best advice I've been given

I'm in a reflective mood this morning.

Recalling some of the best pieces of advice I've been given by people I've worked with and for. And from people outside of work.

These are the ones that stick out.

Procrastination is the thief of time. From my year 7 English teacher. At the time I thought he was nuts. But I've never forgotten it. We all do it. Put things off we don't want to do or are just too hard.

"I don't have time", is the stock standard response.

The best rebuttal to this is, you have time, you're just choosing to use it in a different way.

Just get on with it. Those that do achieve more than those who don't.

Act the role you want to be, not just the role you are. I think this applies to life generally, but certainly in the work environment.

No point complaining about why that promotion hasn't come your way if you haven't stepped up. This is about controlling your own path. Tenacious and ambitious people do more than what they're required to do. They look to the next level up and morph into that role, while still fulfilling their own.

Judge people by the best thing they've done, not the worst. It's easy to get caught up in the minutiae of detail when someone does something you don't like. But stop and think whether that's truly reflective of who they are, on balance. Or perhaps it was just a blip. Out of the ordinary. It'll certainly help your relationships, in the office included.

What are some of the pearls of wisdom that have stuck with you? I'd love to hear them.

Jonathon
Posted by Jonathon Grapsas at 9:01 AM 3 comments:

Why I love the Greenpeace UK site

Look no further than Greenpeace UK. One of my fav's.

Here's where my love comes from:

It's focused. It becomes obvious really quickly what the Greenpeace team want me to do. That's to 'do something' by getting involved in one of their campaigns, or open my wallet.

Whenever you click through to any of their action or donation pages, each of them is coherent and clear. I'm left in no doubt as to what they want me to do. No distractions, no fuss. No worries.

It's clean. Well laid out, good use of white space, good web friendly fonts and design. The content has a nice balance between imagery and copy.

It's easy. I look at this from a "how painful is it for me to do what you're asking me' standpoint. And here it isn't difficult at all. Good navigation, solid search function in the top right hand corner, consistent labeling.

It feels right for Greenpeace. I'm not just talking look and feel, but the tone and the things they're asking me to do. If you had in your mind a picture of what the Greenpeace site would look like, and how it would do its job, this isn't far off the mark.

Below I took a screen shot of the homepage.

The blue highlights the action requests, the black where they've closed the loop providing feedback, the squiggle at the top the easily located and functional search box. The purple line showing where we may want to go a bit deeper to learn about Greenpeace's work, who they are etc.

Hats off to the Greenpeace UK gang. You make me want to keep coming back. 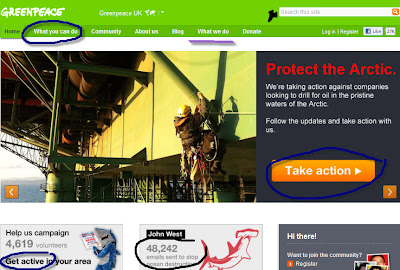 Posted by Jonathon Grapsas at 2:39 PM No comments:

Making your presentations sticky and memorable

Mitch Joel at Twist Image shared some thoughts this week on presenting, in particular how to be authentic.

I loved this line, "Remember, you're presenting, not performing, but the best presentations are also authentic performances."

It's apparent sometimes that presenters cross this line to become performers, and forget what they're there for.

So how can you be authentic?

Mitch suggests "you have to know when you're no longer presenting with passion, but regurgitating memorized lines and trying to perform each line out instead of delivering the content with what I'll call a "quiet confidence."

In other words, be yourself, but with some renewed energy and passion.

What about being memorable?

For me, this is about being "sticky". For those who are starting to wonder what on earth I'm suggesting, get your wallet out today and buy what in my opinion is one of the best business books you'll read, Made to Stick.

The Heath brothers cover in detail how to make good ideas "stick" and not die. It's a cut through read, truly memorable. I still use it to this day.

One sticky tip I learned from this book was how to get a message across in a presentation that will stand out in peoples minds. Let's say you ask delegates a question. Typically you'd hope one brave soul would shove their hand up, whilst everyone else sheepishly avoids eye contact with you. Been there before?

Remove that. Have everyone in the room get out a pen and paper. Get them to write down what they think the answer is, and then simultaneously hold up their bit of paper with their response, as you trawl through the room scanning and commenting on the answers. Really easy, more memorable.

Thanks to Mitch Joel at Twist Image for sparking some thoughts here.

Jonathon
Posted by Jonathon Grapsas at 8:03 AM No comments: