Thought I would blog something incredibly practical and remarkably simple today.

As you know I have studied the way hundreds of charities service their donors and members of the public over the past six years, from all over the world.

One of the biggest reasons charities fail to deliver an acceptable level of donor care is their reluctance, inability – call it what you will, to mystery shop themselves and ourselves. It’s so damn simple but usually overlooked/ignored.

As I have said time and time again to fundraisers on this topic, you don’t need to wait until Pareto Fundraising or another fundraising agency undertakes some formal mystery shopping and benchmarking exercise. Here are three simple but effective ways to make this happen and raise more money for your worthy causes:

1. Select 20 charities in the country within which you fundraise and send them $20 in the post and monitor what happens.
2. Set up a process to mystery shop yourselves – by phone, mail and email. You may even do it face to face (get a friend to walk in off the street and attempt to donate to you or make an enquiry)
3. Look abroad and pick some charities to mystery shop – email might be easiest here, again attempt to send them $20 and sit back and watch what happens

Don’t get hung up on processes, just do it. But make sure that you do allocate someone whose responsibility it is to look after this and make sure they have a decent chunk of time allotted to do it – ensuring they don’t get torn away to do something considered ‘more urgent’.

And finally – do something with the learning’s. Rip off what you like, critique your own materials, and continue the process on an ongoing basis. You’ll be amazed what you can learn and the impact it can have on your communications and service handling. And most importantly, your beneficiaries.
Posted by Jonathon Grapsas at 12:31 PM No comments:

The true value of campaigning?

I’ve read and observed lots over the past few years from charities all over the globe about the value of their campaigning or lobbying efforts. For the most part I hear things like, “If a regular giver subsequently becomes a campaigner it increases their lifetime value by 20%”.

And as fundraisers we love this. Why? Because it’s quantifiable.

But what about direct impact? I’m not talking about how much extra money you can raise by getting someone to take action, but how does it help progress your cause?

For me, the primary reason I am yet to find someone who has truly cracked this is because of that dreaded five letter word…silos.

I once had a meeting with a large NGO and we wanted to discuss some ideas to demonstrate genuine joined up thinking, how to bring fundraising and campaigning together to raise some money and empower individuals to take action.

The campaigners turned up for the start of the meeting, stayed for a bit, left for 2 hours and returned at the end when we were about to discuss ‘the campaigning part’ with a raft of excuses as to why they couldn’t stay for the whole meeting.

So what you say?

This isn’t a rant about campaigners. I like them. The point is, this is a universal predicament. Campaigners and fundraisers working in isolation.

What I am desperate to do is help organizations develop a ‘true’ measure reflecting the impact of their campaigning/ advocacy efforts. Not measuring outcomes, but real impact.

For example, if an environmental group was lobbying MP’s on their green policies, how could that organization measure the ‘greenness’ of the pollies following their work? Not the number of petitions signed or letters sent, but the change in behavior as a result of their work.

Creating such a model incentivizes campaigners and fundraisers to work together as both sides have a tangible gauge for their work and we can get on with developing truly integrated activities (minus arguments about whose budget is being used).
I’d love to hear from anyone who has managed to crack this one and developed such a model (so I can rip it off)!
Posted by Jonathon Grapsas at 5:43 AM No comments:

Qantas and getting on with it in tough times.

All terms that we are hearing daily at the moment. Regardless of which part of the world you are in. And we are not immune to it here in Canada.

But as I plan to fly out to Australia in a few days, one iconic Aussie company has got me thinking about the best way to tackle tough times, whether its economic instability or other. I’m talking about our national air carrier, Qantas. Now whatever you think of them, they are bloody resilient!

In the last few months alone they have dealt with a rupture in the side of a plane which forced an emergency landing, countless other mechanical failures, not to mention escalating fuel surcharges. Not surprisingly, Qantas chief executive Geoff Dixon has come out on the front foot stating that all of these “incidents were unrelated” and that “there had been no significant change in Qantas' rate of reported incidents over the past two years”.

But what shows even greater resilience, and where I think charities should follow suit in difficult times, is their view to advertising/spending. They just get on with it.

I have had no less than 4 emails from Qantas in the past two weeks telling me things like “South America is now closer than ever” and that I should “Grab a Great Deal on Domestic Flights - Sale Ends Soon!” Now I have plenty of travel planned over the coming months and South America is on the cards for next year, but that’s not the point. The point is they faced tough times head on and went about their business.

To back this up, as always I try and illustrate using real and relevant data. When I attended the Institute of Fundraising convention recently in the UK, I listened intently as Jonathan Barker from NFP Synergy talked about research his company had done into the effects of an economic downturn.

The data from the charities included in their study showed that whilst there was a slowdown in fundraising growth during times of negative GDP movement, there was still voluntary income growth. You can see the relative slides in the attached link.

And I’ll bet that those who grew more were the ones who carried on as per normal.

Now I’m not suggesting to be frivolous and make decisions you wouldn’t typically make, but just crack on with it. And equally as importantly, now is the time to really focus on genuine donor care with our existing donors, responding appropriately and respectfully, with genuine thanking and relevant and timely communications. Getting back to basics and servicing the lifeblood of our organizations (our donors) properly.

I bet you Aussies out there didn’t think you could learn something from Qantas now, did you?
Posted by Jonathon Grapsas at 12:02 AM No comments:

Cats in Zambia and getting close to the cause 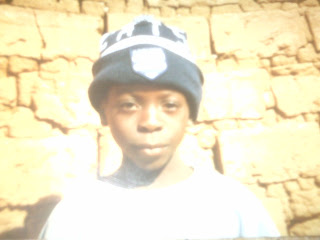 One thing that as fundraisers we don't do enough of is get intimately close to the causes we work for, support and are passionate about.

Typically because of time constraints, often because of logistics. Although few would argue just how inspiring it is and the momentum it can build either in your life as a fundraiser or in your journey as a donor.

This last week has seen two brilliant examples which has really bought this message home to me.

The first relates to a letter we received last week from Plan International Australia with an update on how our sponsored boy is doing. As you can imagine this always creates a spike of excitement in the household, none more so than last week.

Not just because Belfry is growing immensely, doing well at school and his community is really prospering from Plan's fantastic work, but because of the beanie he was wearing on his head in the accompanying photos.

You see for those who know me well, know one thing for sure. How passionate (some may say mad or obsessive) I am about my beloved Aussie Rules team, the Geelong football club. And some time back we decided to send Belfry a Geelong woolen beanie to spread the reach of my team far and wide, and of course to keep his little head warm.

So when we opened the letter to find two adorable pictures of him wearing it, it’s fair to say it made our day!

Not just because he is now a proud Cats fan, but because it bought us even closer to the cause. And that's what it is about as a donor.

The second example follows the Masterclass I delivered last week in Toronto which focused primarily on our experiences as a donor in the recent mystery shopping study we have conducted here in Canada.

At the end of the session I announced that as we were not able to give away all of the money we planned to (as a result of the mystery shopped charities inability to process gifts or just not respond in many instances) - I was offering on behalf of Pareto Fundraising to donate the balance to one/some of the session attendees and set participants a challenge to see who in the ensuing days could inspire me the most as a donor.

The response has been phenomenal. I have had brilliant and moving letters, emails and phone calls from fundraisers who genuinely believe in the causes they work for.

I have even had a call from an amazing lady who volunteers for a large Canadian charity who helps people suffering from arthtitis (and when I say volunteer this includes teaching, helping others cope who are living with arthtritis, speak publically about the condition - you name it, this incredible woman does it). This wonderful lady spoke at length and passionately about her experience as a benefactor but also about her committment to advocate their work as a volunteer for, in her words, 'saving her life'.

Brilliant stuff. I only wish all organizations could inspire me and others as often and as well as some of these charities have.

Now the tough part… to decide to who to give the money to!
Posted by Jonathon Grapsas at 6:15 AM 2 comments: