Why we should focus on impact of our work, not cost 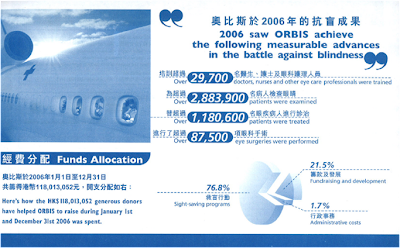 Impact, not cost. Sounds like a really clear distinction. And it is.

But you would be amazed how many charities get caught up in explaining to donors/members of the public how much projects cost and justifying their existence by explaining the breakdown of their programs.

I read with interest this article on Professional Fundraising's site this week, entitled Donors overestimate fundraising and admin spend.

In a new study by leading UK think tank nfpSynery, it was found that British donors grossly overestimate the amount UK charities spend on administration.

To be honest I am not surprised.

One of the scenarios we have 'mystery shopped' charities on over the past 3 years is how they respond to a complaint. Specifically, a complaint focused on the amount the organization is perceived to spend on admin.

What we found was staggering, namely:

- In Australia, only 77% of the charities we approached were able to 'resolve' the complaint in our eyes, meaning that they satisfactorily explained to us a breakdown of where the $ go.

So what does this mean?

What we experienced was that most frontline workers we spoke to struggled to have the information to hand and clearly explain how the charity spends our money.

But more concerning was that rather than focus on where they were having an impact with my donations, they seemed more intent telling me about the % breakdown.

One great encounter we had was with Orbis in Hong Kong. Following a brilliant phone call where the staff member put us to ease and then turned us around by talking through the many and varied ways our gift was 'making a difference' we were then emailed a flyer - which I have shown above - which very simply articulates the enormous difference Orbis' individual donors have had on restoring the eyesight of those most in need.

Simple, but effective. What's plain to see here is that Orbis has treated over 1m patients and performed 87,500 surgeries. And whilst there is a pie chart devoted to the breakdown on expenditure, the main focus is on impact, not cost.

I only wish more organizations took such an approach. If they did then maybe punters on the street might have a clearer understanding on where charities are spending their hard earned.

Jonathon
Posted by Jonathon Grapsas at 2:29 AM No comments:

Time to knuckle down and stop panicking!

"We have developed a recession budget".

"We are going to stop all donor acquisition next year".

As a consultant I'm fortunate to meet many fundraisers daily. So I hear lots of things: some inspire me, some puzzle me and some downright frustrate me. Like the statements above I have heard in recent times.

Working for a data-led agency you wouldn't be surprised that I have been looking closely in recent weeks at evidence from past tough times to try and forecast what's likely to happen over the coming year.

All of the evidence from the past, from North America, down under, the UK and other developed fundraising nations suggests that troubled economic times doesnt necessarily mean troubled times for non profits/charities.

I love this article from Advancing Philanthropy which shows that changes in charitable giving are not directly linked to changes in the stock market (in this case illustrated using the Dow Jones Index.

As I have mentioned previously and as we have been demonstrating daily on Pareto Fundraising's Recession Watch blog - the future for us fundraisers is not necessarily bleak.

Yes its true that at Pareto Fundraising we have seen some drop in the levels of corporate support for some charities - however signs are that individuals are resilient and likely to stick with you.

BUT that doesn't mean we can take our eye off the ball. Donor engagement is more important than ever. And if the research I've done over the last seven years on the way we care for our donors is anything to go by, we do have some work to do.

Get back to basics - thank appropriately, listen to what donors want, fulfill your promises to individuals and provide honest and transparent feedback.

Stick to these golden rules and the ship should keep sailing in the right direction.

And leave the panicking for those working in the financial sector, not us fundraisers.
Posted by Jonathon Grapsas at 11:50 PM No comments:

I've heard stories in the past that the real threat of climate change didnt hit home with Alexander Downer, one of former Aussie PM John Howards' Senior Ministers until it was 35 degrees (celsius) one September day in Adelaide a couple of years back. Now for those not from down under, 35 degrees in September is unheard of.

I had my 35 degree day yesterday.

We had been negotiating with a particular supplier for some time on a certain contract and getting much the same result for the last few months. They had been kicking their heels in on the length of the term. We wanted shorter, they wanted longer.

Until yesterday when I got a welcome reprieve, an email something to the effect of.. "It seems that current market conditions are helping to manage the expectations..."

Bingo. There it was. This was the first time I had actually been in the midst of the economy hitting home.

Not having any real personal interest in the share market (except for mine and some relatives superannuation schemes which has had taken a hit because of recent stock crashes) - I still hadnt born the brunt of the global crisis, until now.

So what? Where does leave charities and fundraisers though?

At Pareto Fundraising we are on the front foot on this one and my boss, Sean Triner has just released his own plan for tackling these tough times. In fact I strongly urge you to follow his ten point plan to managing fundraising in a recession - a must read.

There will more on this, but for now get onto the ten point plan.

Jonathon
Posted by Jonathon Grapsas at 11:26 PM No comments:

Me and me mum 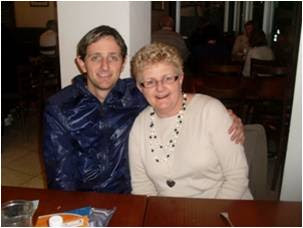 Its been a whirlwind couple of weeks back in Australia, with trips to Sydney, Melbourne and Brisbane.

Last week as I was having dinner with my family I told mum I needed a photo of her and I for a presenation I was doing for work. She got all excited thinking I was doing a 'this is my family' type gig at telling colleagues stories of old family holidays and the like.

So my diplomacy skills escaped me when I explained that I wanted a photo for a Masterclass I was presenting, highlighting the difference in different generations of donors... Errr...sorry mum! But to make it up here is that lovely picture of you. :)

Anyway, what staggers me as I meet fundraisers in all parts of the world is the general lack of differentiation in the way we treat donors that are so fundamentally different in their behavior, life stage and the way they were recruited.

I am talking specifically about donors recruited on the street onto an automatic payment (regular or monthly gift) - as we affectionately call 'F2F donors'.

Yet its amazing how many organizations fail to recognize the differences in the way I behave and the way my mum (donors recruited through other more traditonal channels I.e. direct mail, telephone) behaves.

Someone in a certain (will remain nameless) charity who has a large program recruiting F2F donors once told me they had been in their role almost 12 months and yet had never been told or taught that this group behaved so differently.

Think about the way F2F donors are recruited. They are usually stopped on the street by someone of similar age. Typically on their lunch break, short of time and unlikely to have been looking out for a canvasser to make a commitment to a charity.

They are more transient, because of their age. They typically have less disposable income, again a factor of age. They are also more mobile and more receptive to mobile and email technology.

Besides their ongoing commitment through their automatic payment they dont do much else. They will upgrade (if contacted by phone) but they dont respond to direct mail appeals and they are rubbish bequest prospects (again, a result of age and lifecycle).

I could go on for ages, but I wont. Mainly because I am now on holidays and about to get stuck into a BBQ my future father in law is cooking up.

But consider these points:

- Cognitive dissonance (the horrible feeling you have when you question a decision you have just made) may take effect after a F2F donor has signed up - so do everything you can to kill this early on - welcome calls, materials reaffirming their decision early on after they join

- Upgrades will work if you use the phone. Get to them early, say 4-6 months after recruitment. Even if they dont upgrade, the phone call if done properly, will act as an attrition buster.

- F2F is bringing in tens of thousands of donors each month in most developed fundraising nations, so dont dismiss it lightly. But do think about how to cultivate these special people.

OK, thats it from me. My charcoaled steak is now ready. I return from leave on the 16th of October so may not post any new entries till then.

Jonathon
Posted by Jonathon Grapsas at 7:44 PM No comments: