The cynic in me could answer with the following:

- Online income is still a small portion of all individual giving.
- No-one really knows how to/where to start.
- They are, but its unreported (attributed to other channels).

The above points all have some merit.

But for me, specifically related to recruiting new donors online (I'm not talking about retention, integration, optimization), I've noticed that the following rings true, for most organizations:

A lack of genuine understanding about the online targeting landscape.

Not enough depth of knowledge about how to buy media online. Either none, or limited understanding of how to use paid search. And similar lack of inventiveness around how to move cold/tepid online audiences to become supporters.

Think about when you last went online. You're browsing your favorite news site and you see an advert for flights to Mexico.

Whilst you didn't think much of it at the time, in retrospect ask yourself:

I'd be surprised if you didn't answer yes to the above. Use your own recent experience and work backwards in terms of how that ad may have been placed in front of your eyes.

Now think back to the organization you work for.

How can you apply this thinking? If you're:

- An environmental org: you can reach out to those offsetting some carbon.
- Helping animals: you can place your message in front of someone who has searched for a pet adoption agency.
- Helping the homeless: you can locate find those who have signed a petition online to increase the number of housing shelters in your areas.

I'll be writing more on this. But next time you're playing around online, don't just ignore the ads being places in front of your eyes. Or on the right of your screen.

Think about how can apply the same intelligence to help you find more generous supporters online. People whose behavior dictates they are in the mind space to consider supporting your cause.

Jonathon
Posted by Jonathon Grapsas at 11:00 AM 4 comments:

Cricket and data: all is not always as it seems

I've been copping a lot of flak from my English friends over the past few weeks.

You see, Australia and England have been competing in The Ashes series over the past two months. For those not familiar with cricket or The Ashes, check out the history of the series here.

For those in North America, think Canada v USA in the hockey. Or the Lakers versus the Celtics. Bitter sporting rivalries that ignite two nations, or two cities and sets of crazed fans. For those wondering what the hell cricket is, think a longer version of baseball with two batsmen, 11 players on each team and five day games.

Have I lost you yet? Stick with me, there is a point...

The upshot is that England annihilated us, winning the series 3-1. Which wouldn't be as hard to take except for the fact that until recently the tables have been turned. In fact Australia ruled the cricket world for the best part of two decades.

So the ribbing between mates has been at an all time high recently, and I in particular have been bearing the brunt of it (I'm now wishing that I shut my mouth during my time living in England).

But I got a chuckle this morning when my Aussie mate Tyron, living in the UK, sent an email, with a rather amusing story attached including the following graph. It plots the relative success in Ashes history over the last three decades with the relative employment levels of each country.

In short the story and chart suggests an inverse relationship between holding the 'Urn' (the trophy awarded to the winning team) and the health of the country's economy.

Wish it was that simple, for fear of the humiliation we've put up with recently, I'd trade it for double figure unemployment. It would spare me the barrage of insults from my northern friends.

Data is not always what it seems. As the adage I often refer to explains, data + insights = intelligence. And as much as I'd like to point the fingers at our insipid cricketing performance to our strong economy, I think that's a long bow to draw.

Don't look too hard for something you desperately want to be there. Ensure you're armed with the right information, all of the context, and not seeing things through rose tinted glasses, merely to see the picture you want.

Here's more on the Ashes and economy relationship via Business Spectator.
Posted by Jonathon Grapsas at 8:15 AM 1 comment:

Trust and charities: getting on the front foot

Over Christmas, I caught up with lots of friends and family I hadn't seen in some time.

Twice during this period, the conversation turned to charity. Once, ignoring the fact I was sitting there (despite knowing broadly what I do for a job) and the other time because I was sitting there. In other words, friends felt they could vent with/at me knowing what I do.

Both dialogues were similar. Murmurings of "not sure which charities I could trust" to "Can't believe they waste money sending me these letters".

At the heart of both of these tirades from those close to me, was a severe lack of trust born out of two things. No real education on how charities do their work and an inherent belief that if charities spend money it must be wasteful.

So after some pretty lengthy discussions about the world we live in and the economics of fundraising, I got thinking.

Are we doing ourselves any favors or do we sit on our hands and cop this flak?

Not surprisingly, for the most part its the latter. It's reactionary. And of course is hurts us as a sector.

I turned to the web to take a peek at whether organizations help themselves either 'organically' through search (in other words, are they helping themselves with the content on their sites), and/or through paid advertising.

Here is what I found.

The first screen shot here shows what happens when I enter 'which charities should I trust?' 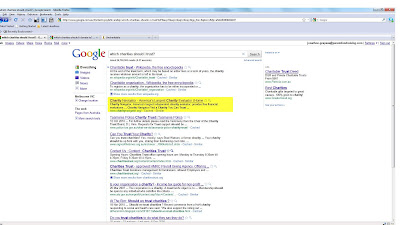 The answer is not much. Wikipedia references to to charitable trusts, as opposed to trusting charities ranks first. In terms of paid ads (right hand side of the page) little action, and nothing at all from industry groups promoting giving and philanthropy.

Of course you'll notice that third on the organic listing is charity watchdog Charity Navigator. That's about as much air time as they'll get here, their measures flawed and destructive as they're based solely on unfair financial measurements and not on real charitable impact.

So where are we?

I found it interesting that industry bodies, nor charities for that matter have taken the bull by the horns here? Do we not talk about why we're a trustworthy organization that is having impact? Either within the content on our site, or by paying for keywords through Google ads?

Then this, when I typed 'which charities should i donate to?' 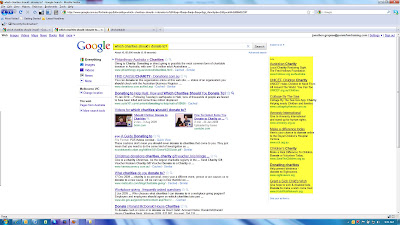 A slightly different story here. Whilst you could argue they're different scenarios, a much more proactive approach taken with several organizations (highlighted on right hand side) bidding for these keywords either using paid ads or through their Google Grants.

There's a lot written about mistrust of many wonderful organizations in our sector. We spend a lot of time talking about industry bodies, task-forces, working groups. All aimed at sticking up for what we do. Being on the front foot.

Yet there are some perfectly good opportunities to do this, very simply, very easily. And we're missing it.

Please get on the front foot.

For more stuff on how to use Google AdWords, visit an earlier post.

Jonathon
Posted by Jonathon Grapsas at 8:59 AM 3 comments: