Getting some end of year cash in the door

There have been some really good posts floating around the last few days focused on practical tips for your end of year push.

So, how do you get that cash in the door during the festive season? For many, the lifeblood of our organizations.

Rather than reinvent the wheel I'm going to re-hash an old post, ten copy tips for your next appeal.

However I'll add the following suggestions to give you the best chance to maximize cash gifts right now:

- Tell me the single most important thing (SMIT) that you need to tell me at this point in time. No superfluous information, no distractions. One thing, one thing now.

- Add some extra layers to your end of year push. Consider: pre appeal conference calls for a select group of donors, pre and post email "sandwiches", post appeal phone calls (a nice reminder that the end of the year is approaching and we have not reached our target).

- Promise to feedback post appeal as to the impact you've been able to impart. Then do it. Early January is a wonderful time to reflect on a year gone, and look ahead to the stuff that needs to happen this year.

- Don't sugar coat your appeal. Similar to point 5 in my earlier post, your job is to bring those who care (donors) closer to those in need (beneficiaries). We are not moral gatekeepers, we're fundraisers. Tell it as it is.

Good luck getting that all important cash in the door. And please, share your experiences.

Jonathon
Posted by Jonathon Grapsas at 5:30 AM No comments:

What I wish I knew

A colleague tweeted the other day asking what as a fundraiser do I wish I'd known/done early in my career?

I'm not one for regrets, but racked my brains to think of some of the things that may have helped knowing when I stumbled into the fundraising world. Mainly:

- I wish I'd got my hands on the Tiny Books of Fundraising much, much earlier. They're called Tiny for a reason, but chock full of nuggets of information that are priceless and lay the foundations for what fundraising is all about.

These are a must read for any colleagues that work with me as part of their induction.

- I wish I'd understood that what people say and do are two very different things. It didn't take me long to figure this one out, but knowing that "I won't read/respond to/give to that" doesn't necessarily correlate to response is a handy lesson to learn.

Ask yourself, how many statements do you make about things that you plan to do that you actually follow through on? Apply the same logic to fundraising. People simply respond to darn good fundraising, not just what they think they will.

- I wish I'd asked more people more tough questions. Show me some rubbish things you've done. Talk to me about the biggest screw up you've made. The worst performing campaign. There's lots of chest beating that happens, we're all guilty of it. But I'd rather work out how to avoid common pitfalls than simply look at muscle flexing and storming campaigns.

- I wish I'd realised how important it is to be disciplined with what you do, avoiding loads of distraction. I'm not suggesting stifling innovation, but I would encourage doing what works, and do it really well. Remember what pays the bills.

Ok, I'm starting to feel a little like a kid penning their Christmas wish list. I just wish I'd written this post a few years back.

We really need the money. But we don't want to look like we are inept.

Thought about that before?

It's a valid concern.

In recent times I've had this conversation with several fundraisers. The discussion comes about when endeavoring to create more urgency to garner further support.

Naturally we think, how do we do that without looking incompetent? Even if you're bloody good at what you do, even the best in the world, this fear can arise.

My suggestions to counter this:

- Ask when you need the money, stop and feedback in between.
- Find the right times to show off your wares, announcing your successes.
- Do a terrific job explaining why you're unique and better than everyone else at least one thing.
- Ensure the execution of the ask is clear, concise and explains why you need help, right now.
- Get the balance right between asking (when there's a need) and non-asking (donor care).

Get these things sorted and the lifeblood of your organization, your supporters, won't question your work. They'll embrace it, and give time and time again.

Jonathon
Posted by Jonathon Grapsas at 7:05 AM No comments:

The link between in memory and legacies?

When I attended the Institute of Fundraising Convention in July I listened to some interesting stuff about the link between gifts made in memory and legacies (bequests).

People are making a gift in memory of someone they care about. They are in that head space.

So we've recently been doing some legacy prospecting with one of our clients. Generated a chunk of new confirmed legators through the advent of online/offline surveys (with some follow up activity).

And guess what? One quarter of them had an in memoriam relationship with us. No other financial history, simply made a gift in memory.

It's fair to say this at the heart of legacy approaches for many organizations. Take Cancer Research UK for example. Check out the placement of their legacy and in memoriam asks within their website.

Coincidence? I doubt it. 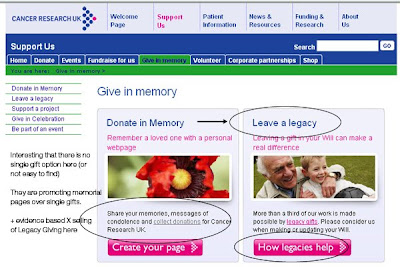 I'd suggest looking closely at those who have left you that lasting gift and those that have planned to.

In memoriam programs are often the poor cousin of the fundraising mix. Usually because we don't really know what to do with them.

All is not always what it seems. There may be more value there than you think.

Jonathon
Posted by Jonathon Grapsas at 8:41 AM 8 comments: