We were fortunate this morning to have Leonard Coyne from the Soi Dog Foundation spend a couple of hours with myself and my colleagues at Pareto Fundraising sharing how they had successfully managed to recruit hundreds of regular, monthly donors directly from facebook.

Yes you read that correctly, recruited monthly donors from facebook. An organization that generates around $300,000 AUD a year has managed to find more than 500 ongoing, monthly supporters (giving $20 a month) in the last year. That's over $100,000 a year (over one third of their income) coming from facebook recruits.

Incredible. And all very doable.

So here are the secrets to their success, and what Leonard candidly explained to us that they have put into practice over the past few months. It isn't rocket science, but it bloody works. 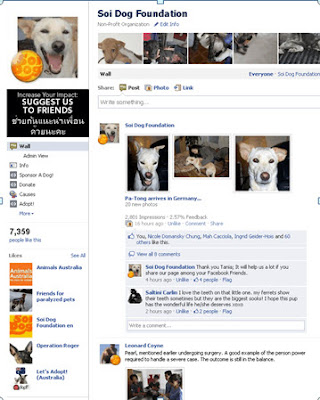 Perspiration. They worked hard, they sweated. They were also incredibly patient. One of the mistakes organizations make is falling out of love with social media as quickly as they fall in love with it. "We need to be on facebook". The proceed to set up a page, recruit a tonne of 'fans', then run out of ideas or energy and simply do nothing.

Leonard has invested time and effort into ensuring not only do Soi Dog have a social presence, but that they commit to making it work, from a fundraising perspective. Not everything has worked, they've got stuff wrong, it's been about trial and error. And it's paying off.

Let go of control. The Soi Dog page now has adaptations in 6 languages, driven purely by advocates who have offered their support, and then run with it. Soi Dog isn't playing big brother and micro managing, they let their administrators post new comments, interact with fans, suggest new applications.

I once heard someone at a fundraising conference comment that they were afraid to relinquish control because people would 'talk about them' and that they weren't able to control their brand. The reality is people will talk about you anyway, rather than try and sanitize it, encourage it. Soi Dog has.

Advertising and asking. Leonard's been using facebook advertising for the last year, recruiting regular donors from targeted ads (particularly focusing on individuals with an interest in animals), and also placing ads to their own 'fans'. As Leonard commented, advertising to their fans seems counter intuitive yet in fact it makes sense. They are essentially what I'd call tepid prospects and we know tepid prospects respond better than those with no affinity at all.

They regularly attach asks (to become regular givers) to stories and photos they share, like the one below. They're not afraid to show confronting (real) imagery, attached with a dog that needs help. And then ask.

Posted by Jonathon Grapsas at 12:29 PM

I'd be curious to hear more about the ads. Specifically about the call to action in the ads. Where they calling attention to a specific dog in need?

Also, I notice they have a Birthday tab. Did they target fans on their birthdays?

Re the call to action, they typically showed specific dogs (not always with a name with showing an individual dog). You can see some examples in the presentation which I have now uploaded for you to look at.

Leonard here. In answer to your questions:

No we were not referencing a specific dog in need, however I think that is a great idea. Were one to do that I would think the way to go about it would be to have multiple ads under the same campaign with the ads being identical except for the dog referenced.

(Could also provide the opportunity for testing which imagery works best).

On the subject of imagery, the more shocking the better. This however can be a bit of an issue in that FB manually reviews ads and depending on the sensibilities of the reviewer ads can get knocked back due to being too graphic.

But... always best to submit the ads late Sunday evening (California time) in that the reviewers come in Monday morning their time and are so overwhelmed with ads to review they pass most anything!(Seriously)

Also if an ad gets kicked often if the same content is submitted as a different ad it will be approved.

A key point (IMO) in relation to ad content is to be very clear on what you are "selling" and as far as possible use that clarity to DISCOURAGE clicks and hence (hypothetically) only being paying for higher quality clicks. (Say for us: Ugly dog, Thailand, recurring gift etc.)

Concerning the birthdays re: advertising no we were not targeting our fans on their birthdays but again that is a great idea (fans being the operative word.

I am fairly confident in saying you could target them directly to your Birthday application on your Fan page.

Thanks for sharing, Leonard and Jonathon - I'm going to give this one a go, now that I've figured out how to do it! Will let you know how we get on, although we're starting from very humble beginnings! :)

Awesome, thanks Nick. Keep us posted so we can share your story too...

This was an excellent post and was very insightful.

Accueil - AFRIKAN DIASPORA CINEMA
ADC is a video on demand platform that produces and distributes its own films. We are located between Brussels and Paris . Composed of passionated of art in general : directors, photographers , actors , model photo, athletes, artists, musicians, singers, ... all united by the passion for cinema . Our ambition is to create a new film industry we call African cinema in the diaspora. We start with few resources but very large amibitions . And we will achieve our goal . We are determined. We produce the best films and series from the African diaspora . Thank you for your support

Get daily ideas and instructions for generating THOUSANDS OF DOLLARS per day FROM HOME totally FREE.
JOIN NOW

Are you looking for free YouTube Views?
Did you know you can get them ON AUTOPILOT & ABSOLUTELY FOR FREE by registering on You Like Hits?

Hey,
Dear Admin!! Whatever you tell here is true I really appreciate on this. I am being happy and acknowledged one your article,are you supposed to read a column when a moving pen keeps drawing a disco dancing silhouette on someone's arm over and over - a silhouette moreover that does a frenetic John Travolta type dance in the corner of your eye.See more at Animals Ads uk

Wow!Very impressive. For taxfree crowd fund raising , your writing will be very motivating and inspiring as well for many.

I havent any word to appreciate this post.....Really i am impressed from this post....the person who create this post it was a great human..thanks for shared this with us. http://www.brsm.io/buy-real-facebook-shares/

I exactly got what you mean, thanks for posting. And, I am too much happy to find this website on the world of Google. fundraising solution

printer on rent in delhi
CCTV Camera on Rent in Delhi

Gamerstopup is a online based shop which started it's journey by selling Digital Game Codes, with times we expanded our service to it's extent.
https://gamerstopup.com/