James Julien: saying goodbye to a great fundraiser, and an even better guy... 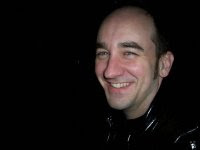 It's with some irony that my last post was about a great day for the Canadian charitable sector, as this post marks a tragic day for our sector.

On Friday the 20th of February, 2009 James Julien, founder of Public Outreach and one of the pioneers of face to face fundraising in Canada, passed away in a hospital in Melbourne, Australia. James was surrounded by his mum Denise and a few close friends after suffering two strokes over the preceding few days.

Those who knew James, myself included, knew him as a charismatic and passionate fundraiser, someone equally full of energy and ideas, and above all a terrific guy.

I've read many tributes to James over the past two days and lots of them have told stories of their memories of the James Julien they knew, and in particular their first meeting, which typically was memorable.

I certainly remember the first time I met James, almost two years ago to the day, at the Fundraising Institute of Australia national fundraising conference in Melbourne at the beginning of 2007.

In some twist of fate, I kept finding myself in the same sessions as James and was intrigued by this vertically challenged guy, immaculately dressed, with a funny accent making lots of comments and observations about the topics being discussed. He wasn't necessarily accepting the norm, he was pushing the boundaries.

I was immediately drawn to him, not just because of his funny accent but because he really knew his stuff. 'This guy gets it' I thought. I had to meet him. So I went and introduced myself and we hit it off immediately. A few days later we were sharing a drink at my local watering hole and we have been colleagues and friends since.

James was actually one of, if not 'the' driving force behind me moving to Canada and setting up for Pareto Fundraising here. I joked with him and others that if things didn't work out I would blame him!

In the two years I knew him, besides his fundraising brilliance, his energy and his obvious drive, the thing that I'll remember him for are his absolute commitment to doing the right things in order to help others. Completely selfless.

James helped me enormously making the transition to his beloved Toronto and the fundraising community that he knew so well. The contacts and introductions he helped me with have really made a difference for me and for that I will be eternally grateful.

Why did he do it? Why did he make the effort for someone he had previously met just a few times? Because he believed in the work I was doing and knew it would make a difference. Simple.

That's the sort of guy he was. He didn't do what he did for fame or fortune. He did it because he cared.

My thoughts are with James' mum Denise, John, Bryan, Pamela, Mike and the rest of the Public Outreach gang.

JJ you will be missed mate. But you will be remembered for the difference you made in your 38 years.

Posted by Jonathon Grapsas at 4:33 AM

Another wonderful tribute Jonathon. Obviously James touched a lot of people in his time here. Thanks for sharing your thoughts.